Five Awful Sales Tactics you have to Avoid We spend a lot of time talking about how to generate and close sales. The flip side of what to do—and it’s every bit as important—is what not to do. Keep these pointers in mind to avoid behaviors that can send your lead running.

You’re a professional, so you know how to set a professional tone in a conversation with a prospect. But keep in mind that you don’t want to sound like a robot or someone talking from a script. Specifically, don’t keep repeating the prospect’s name in conversation; this may have been a popular approach at one time, but it’s slightly suspect today because it sounds unnatural.

Speaking of tone: if you naturally incorporate jokes or humor into your conversation, go ahead and do that. But if you aren’t a comic, don’t force the issue. Be yourself and speak about what you know. People will appreciate how authentically you come across.

Along these lines, don’t reveal too much about what you know about your prospect. Sure, you need to do some research about them so that you can talk to them. But don’t reveal that you were clicking through their social media profiles and that you know the names of their children and pets. They might feel like you’re stalking them, not trying to sell to them.

You can't give the customer everything they ask for

Avoid the "Say Yes to everything tactic" since it most likely will shine through. And if the customer buys your lies you will have a problem when delivering the product. Instead try to take the lack of featuers to you advantage. In many cases the customer just asks for a lot of "nice-to-have" features. Know the most common ones and have and clear answer of why they shouldn't focus on that specific feature. Know your value propositions and explain how they get the most value out of your product and existing features. You will sound very religable and experienced within your industry. And one last thing, Never make a promise in hopes a feature will get built in time or that the product can be “hacked” to indirectly solve a customer problem. 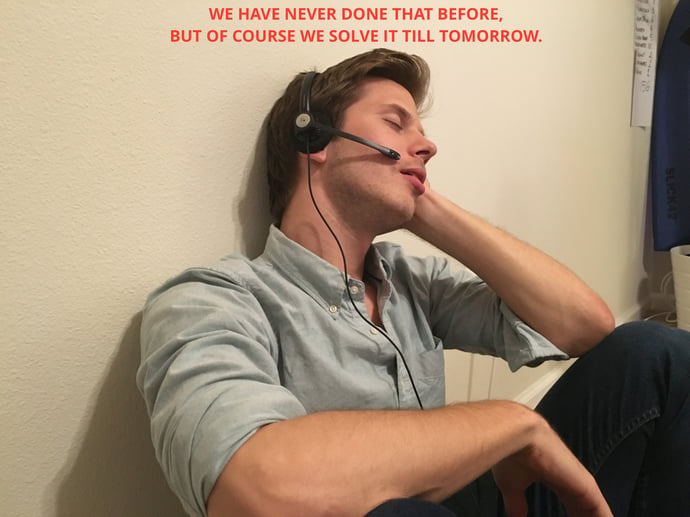 No one likes hearing someone read directly from a screen in a monotone voice. It’s tacky and it sounds like you don’t know you business.  And who want’s t do business with someone who doesn’t know their own business? With that said I don't mean that you shouldn't have sales scripts at all. Just don't make it to obvious that you have them in front of you when doing your call. Instead learn them, try them out and make a twist and test again and make it to your own script which you feel comforatble with.

Research your prospects. Don’t send out an email blast to leads that haven’t been vetted. Prospects can recognize when they’ve been improperly targeted; don’t waste their time (or your own) if they’re not a good match.

Don’t disappear; do what you’ll say you’ll do. If you tell your prospect that you’ll follow up with them in a week, do so—even if you are starting to feel like you might not get a sale. You don’t know how or whether you’ll encounter the prospect in a different context in the future.

Don’t pressure anyone for a sale. Your prospects understand why you’re developing a relationship with them. You don’t need to hard-sell anyone; communicate clearly and sales will result.

Keep these pointers in mind about how to follow a prospect through to a sale; your integrity will shine through and that’s a win-win for everyone.

And to have the very perfect timing ensure that you have all the insights you need to take the next step. What if you could call the prospect just before they are about to enter a decision meeting. Read how one of our customers uses GetAccept to increase the close rate.

Good luck with your sales!