The story behind the esignature and its benefits

WHY DIGITAL SIGNING OF CONTRACTS?

Why digital signing of contracts?

The history of digital signing 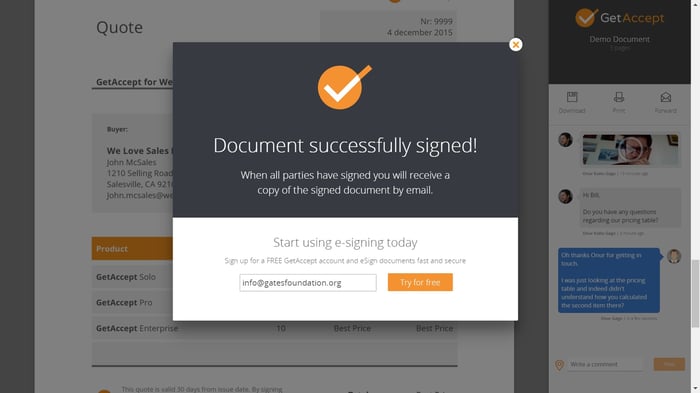 Many people are under the wrong impression that digital signing of documents is a new, untried fad. The truth is that digital signatures have been around for decades, but have become more popular only in the last decade.

Today, electronic signatures are well established and are considered the most reliable way of getting documents signed online and signing agreements digitally. Unlike the original digital signature technology, today's e-signing is easy to use and can be created using any computer with an internet connection.

All documents and data created by our customers are automatically encrypted with an AES 256-bit EV SSL encryption key.

GetAccept has strict policies regarding internal access to data. Only authorized personnel have access to encrypted customer data.

Automated processes ensure that data that cannot be saved over a longer period is automatically cleared according to the time intervals required.

GetAccept has advanced search methods to find data and the ability to export selected data to readable format.

Routines in case of intrusion

GetAccept has developed processes and routines for protecting data and informing affected people who are applied in the event of an infringement.

Come hang with us!

Subscribe to our newsletter and get the latest news, events,
hacks and all the other crazy GetAccept stuff.